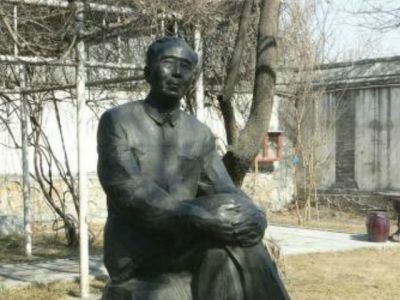 Guo Moruo Memorial Hall was originally a courtyard where Guo Moruo, a highly talented dramatist, poet, archaeologist, historian and palaeographer lived for 15 years from November 1963 till his death.

This courtyard was used by the Qing Dynasty formerly as a prince’s garden between 1644 and 1911. In 1982, the courtyard was brought under state protection after being declared as an important cultural relic. In 1988, on Guo Moruo’s birthday, it was opened to the public and was named the Guo Moruo Memorial Hall.

Visit this hall and walk around the courtyard where Guo wrote many of his works including poems, monographs and theses. You will also find many of his books, manuscripts and documents preserved there.

Guo and his wife developed a beautiful garden here which still continues to flourish. You will find the gingko tree to the northern end of the lawn. According to Guo, gingko tree is a living monument to Chinese culture.

At the center of the lawn is a bronze statue of Guo. This statue was sculpted on his tenth death anniversary by a Central Academy of Fine Arts professor and a popular sculptor Situ Zhaoguang. Guo Moruo Memorial Hall is a popular tourist attraction you must not miss on your trip to Beijing.
Image by 用心阁 on Wikimedia under Creative Commons License.