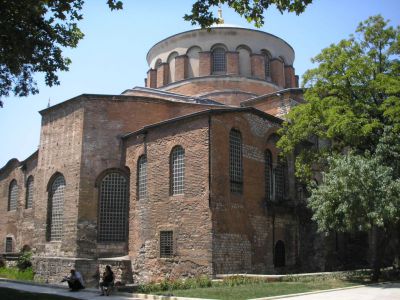 The Hagia Irene, also known as the Hagia Eirene ("Holy Peace") in Greek and Aya İrini in Turkish, is an Eastern Orthodox Church located in Istanbul, in the outer courtyard of the Topkapı Palace. After being closed, in April 2014 it was opened to the public as a museum. The entrance fee is 20 TL per person.

The church originally stands on the location of a pre-Christian temple, and it is one of the first churches to be built in Constantinople. During the 4th century, Roman Emperor Constantine the Great commissioned the first Hagia Irene church to be built, which burned down in 532. In 538, the church was restored by Emperor Justinian I. Before the Hagia Sophia was completed, the Hagia Irene used to serve as the Patriarchate.

The building is a typical Roman basilica and consists of two naives and an aisle, which have been divided by pillars and columns. Today, the Hagia Irene is one of the last standing examples of Byzantine architecture in Istanbul which has retained its original atrium. Under Constantine V, the church’s interior was decorated with frescoes and mosaics.

Today, due to its extraordinary acoustic characteristics and impressive atmosphere, the museum plays host to the classical music concerts held as part of the Istanbul Music Festival.
Image by Gryffindor on Wikimedia under Creative Commons License.