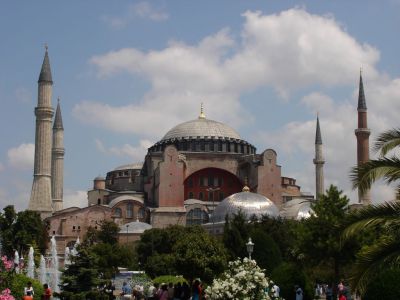 This monumental structure in Istanbul was once an Orthodox patriarchal basilica, then a mosque, and now, finally, is a museum. It was built in the 4th century by Constantine the Great as a church, and has seen much changing in the ruling powers of the city ever since.

Many people mistake it as being dedicated to Saint Sofia, but the church, in fact, was originally dedicated to the second being of the Holy Trinity, and its full Greek name is the “Church of the Holy Wisdom of God”, with Sophia meaning “Wisdom”.

Before its takeover by the Ottoman Turks in 1435, the church housed many holy relics. It was converted into a mosque by Sultan Mehmed II, and remained a mosque for the next 500 years.

Located in the Sultanahmet neighborhood, Hagia Sophia is, without doubt, one of the best examples of Byzantine architecture and was declared a world heritage site by UNESCO in 1985. It features many distinctive decorations and is particularly famous for its fascinating mosaics.

Why You Should Visit:
Unique in being both a church and a mosque, with pertinent symbols omnipresent.
Even if you are not familiar with Byzantine history, you will surely be impressed.
The multi-domed enclosure is so mesmerizing that it's hard to take one's eyes off it!

Tip:
Should you want to visit multiple museums, buy a Museum Pass at the Museum of Turkish & Islamic Arts as there are few people in the line (the queues at the Hagia Sophia are usually enormous and it can take an hour or more to get a ticket). The Museum Pass (valid for 5 days) allows you to queue-jump into this and other museums/attractions as well.