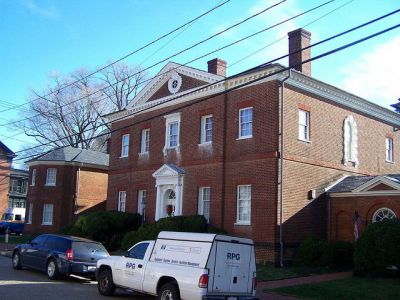 The Hammond-Harwood House is one of the premier and, arguably, the most exquisite property remaining in the United States from the British Colonial period (1607–1776). The house was designed by architect William Buckland in 1773-74. It ranks architecturally with many of the great mansions built in the late Colonial period, and is the only existing work of the Colonial academic architecture that was principally designed from a plate in Andrea Palladio’s I Quattro Libri dell’Architettura.

The Hammond-Harwood House is a five-part brick edifice with a five-bay two-story central block, two-story end wings and one-story connecting hyphens on either side. The central block has a shallow hipped roof. The wings project toward the street with three-sided hipped-roof bays. The hyphens are rendered as a blind arcade, with the central bay a door opening with a pediment above. There is little decoration, with plain rubbed brick flat arches over the windows. The interior presents the appearance of symmetry where it is in fact not symmetrical, using false doors where necessary to maintain the illusion.