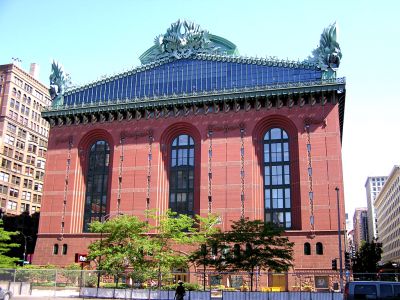 The Harold Washington Library Center is the central library for the Chicago Public Library System. It is named for former Mayor Harold Washington. The Harold Washington Library opened on October 7, 1991. After the refurbishment of the Chicago Cultural Center in 1977, where the central library had been housed, much of the library's collection was placed into storage. Upon the building's completion in 1991, the new Mayor Richard M. Daley named the building in honor of now-deceased Washington, an advocate of reading and education among Chicagoans as well as an advocate of the library's construction. Since completion, the Library has appeared in the Guinness Book of Records as the largest public library building in the world.

Why You Should Visit:
Special displays & collections worth visiting on each floor!
There are poetry readings, art exhibits, and the children's library is unparalleled.

Tip:
Be sure to take the elevator straight the 9th floor to see the gorgeous glass ceiling and enjoy the sunshine and quiet of the Winter Garden.
The 8th floor has practice rooms for musicians and is where you can listen to rare recordings or play the piano.
The old library, now Cultural Center, is equally interesting and has the world's largest Tiffany dome in its own magnificent room.