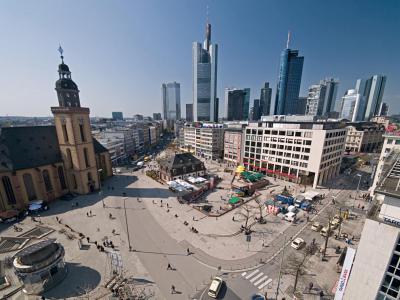 Hauptwache is a central point of Frankfurt and one of the most famous plazas in the city. The original name Schillerplatz was superseded in the early 1900s. The Hauptwache ("Main Guardroom") building, which gave the square its current name, dates back to 1730, and was designed by German master builder Johann Samhammer. It features red sandstone Baroque-style exterior and a hipped Gothic style triangular roof with three chimneys.

The original purpose of the place was to house headquarters of the city's Stadtwehr militia and a prison, when Frankfurt was an independent city-state. The Hauptwache went down in history when it was stormed by student activists in a failed attempt at freeing political prisoners in 1833, called the Frankfurter Wachensturm. The building then served as a police station, and in 1904 became a cafe which it still remains to this very day. It marks one end of the Zeil and adds a great deal of old-world architectural charm to this busy part of Frankfurt.

On 7 April 1920, the square was the scene of yet another Hauptwache incident when French troops opened fire on students protesting against the French occupation of Frankfurt. Heavily burned in World War II bombing, the building was reopened in a provisional form with an altered roof in 1954. In 1967, amid the construction of the U-Bahn tunnel through the city, the Hauptwache edifice was dismantled, moved and then rebuilt over the new underground U-Bahn station.

Today, Hauptwache station is one of the most important crosspoints of the Frankfurt public transport system, served by eight S-Bahn and six U-Bahn lines. A key element of the plaza is a sunken terrace leading down to the station and an underground pedestrian area with shops, dubbed by the locals as "das Loch" (the Hole).

Visitors, commuters and shoppers can enjoy a light refreshing meal at the Hauptwache café with its quaint ambiance reminiscent of a momentous past. Apart from it, the surrounding buildings are mostly modern high-risers, except for the imposing St. Catherine's Church.

Tip:
If the weather permits, sit down and have a glass of beer, glühwein, or Frankfurter apple wine outside the Hauptwache.
If you're lucky, there will be an apple wine festival when you arrive; then you could mingle with the local professionals, wine-lovers and travelers alike.
Image by Eva K. on Wikimedia under Creative Commons License.
Sight description based on wikipedia