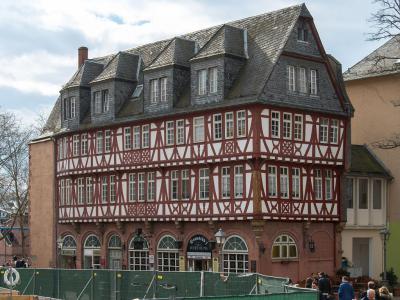 The Wertheim, also known as Wertheym, is a half-timbered house built around 1600 at the Fahrtor, between Romerplatz and the Main river. This is a listed building and the only house of its kind in the Old Town that has survived almost intact the World War II. In large part for this fact, much as for its unique Renaissance appearance – typical of the Frankfurt architectural style – and a favorable position, this building is now very popular among tourists.

The name Wertheim was first mentioned in 1383, referring to the then owner of the property on this site, who probably came from Wertheim. The current building dates back to around 1600 and, apparently, served initially as a warehouse with the goods stored and traded in the open basement between the arcades or in the cellar vaults, especially during fairs in spring and autumn.

From the 17th to the 19th century, the Wertheim had served as a customs house and facility for the city guard. In 1926, after renovation, there was a café and a restaurant on the ground floor.

The Wertheim was the only one of nearly 1,250 half-timbered houses in the Old Town to have come out largely unscathed from the air raids in World War II. Some credit it to an exit made in 1940 onto Römerberg, next to the extinguishing water basin at the Justice Fountain.

Still, it wasn't until 1963 that the Haus Wertheim was placed under monument protection which led to its eventual restoration in the mid-1970s. Following that, between 1981 and 1983, the half-timbered houses on Saturday Mountain had been reconstructed, and from 2012 to 2017 several historic streets had been built as part of the Dom-Römer project.
Image by Epizentrum on Wikimedia under Creative Commons License.
Sight description based on wikipedia