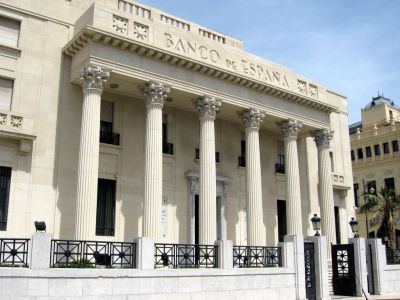 Headquarters of the Bank of Spain in Malaga, Malaga

Found between the City Hall and the Old Post Office House, on Paseo del Parque, the Headquarters of the Bank of Spain in Malaga (Sede del Banco de España en Málaga) is a neoclassical building designed by architect José Yarnoz Larrosa. It was built from 1933 to 1936.

In keeping with the solid image of the bank headquarters that it represents, the three-storey building's shape and elements are meant to produce a strong impression. To this end, the architect used an imposing façade with its main element being a hexastyle porch with Corinthian columns supporting a portico. This columned portico, presiding over the front facing the park, represents a key link with historicist architecture, but with the fascist architectural aesthetics quite common during the 1930s, and as such is the highlight of the building.

With this, the edifice successfully reflects the idea of a great public property, both ancient and contemporary at the same time.
Image by Olaf Tausch on Wikimedia under Creative Commons License.