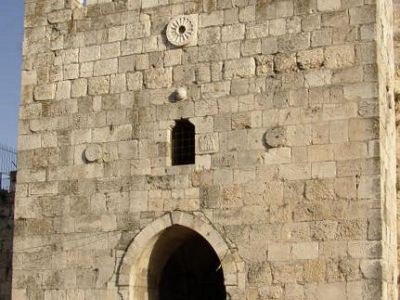 Herod's Gate is part of the northern wall of the Old City of Jerusalem and connects the Muslim Quarter inside the Old City to the eponymous Palestinian district, Bab az-Zahra, located right outside.

Herod's Gate is the Christian name associated with the Bible, according to which Pontius Pilate sent Jesus to Herod Antipas, whose palace reportedly stood on the site nearby now marked by the Greek Orthodox Church of St Nicodemus. This church is built on top of another ruined Crusader temple, commonly known in Arabic as Deir al-'Adas, "the monastery of the lentils", suggesting it was once a kitchen feeding lentil soup to the poor. Another theory claims that here was a prison in which Saint Peter was held by Herod Agrippa, nephew of Herod Antipas. Bab az-Zahra is yet another Arab name for the gate and is due to the proximity of the Bab az-Zahra Palestinian neighborhood. In Hebrew, the gate is called Sha'ar HaPrakhim, which means "Flowers Gate", popularly associated with the blooming flower stone rosette adorning the gate tower.

Rather modest in appearance, this gate is one of the newest in Jerusalem. In 1875, in order to provide a passageway to the new neighborhoods emerging to the north of the Old City, the Ottomans opened a new gate (expanding an old wicket) in the northern, frontal wall of the tower, facing the Sultan Suleiman Street.

Often neglected by tourists, Herod's Gate is not too busy, although during the day it is practically hidden by stallholders. Those looking for a more authentic cultural experience are advised to visit the area inside the gate. There, instead of souvenir vendors you will find a proper market frequented by the locals for everyday shopping.
Image by Herwig Reidlinger on Wikimedia under Creative Commons License.