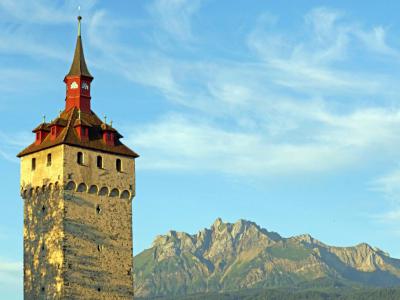 The Heuturm (Hay Tower) originally stood on the site of today's Wachtturm (Watchtower) since 1350. It was named so for being a hay storage, but – just as many other Lucerne's towers, back in the day – was also used to store gunpowder.

The latter proved fatal for the building on July 30, 1701, when a strike of lightning caused detonation of the 350 quintals of the explosive inside, completely destroying the thick walls. A rain of stones sent over the city inflicted immense damage on the adjacent wall and houses in the Old Town, and killed many locals.

Immediately after the accident, a new tower was built in the place. Designed for high watch, it only got the name in 1768, when a guardroom from the nearby Luegislandturm was moved here and the complicated roof structure added. The guardroom, fitted with a green tiled stove, remained in use until 1895 and can be visited today, along with corridors to the roof. At a later time, the police radio transmitter was installed within the tower.

Some of its sections are open to the public.
Image Courtesy of Flickr and Dennis Jarvis.