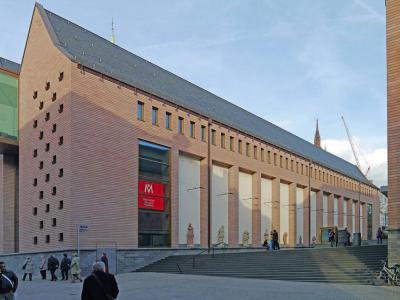 The Historisches Museum Frankfurt (Frankfurt History Museum) was founded in 1878. Aimed at recounting momentous events that have shaped the city, the museum houses several permanent exhibitions, featuring cultural and other objects relating to the history of Frankfurt from the early medieval period to the present, as well as provides space for temporary ones.

Permanent exhibits are arranged in a chronological order, taking visitors through the early medieval times when Frankfurt was a city-state, the late Middle Ages, the 16th-18th centuries, the 19th century and the city between 1866 and 2001. Special exhibitions are also held regularly.

The HMF moved to its current location – the 12th-century Romanesque Palace, called Salhoff – in 1955. Today, it represents a complex of five historical buildings, plus a new exhibition hall and a small administration building replacing the extension built in 1972.

At the entry, visitors are greeted with a portrait of Charlemagne. Further inside, the museum treasures include the St. Anne altarpiece from a Carmelite church, the Heller altarpiece by Albrecht Durer from a Dominican cloister, and a sculpture depicting the reconciliation of Emperor Otto I with his brother Heinrich by Alfred Rathel. Major attractions within the museum are the three scale models of the city made by the Treuner brothers: one showing medieval Frankfurt, the other showing the city after the 1944 bombardment, and a third modern postwar model of Frankfurt.

Why You Should Visit:
The museum marries old and new in its build and proves Frankfurt's importance as an international cultural hub.
All exhibits provide descriptions in German & English; the interactive digital info is a state of the art.
Sharp new connected buildings are a joy to be in; also, there is an awesome cafe with both inside & outside seating.