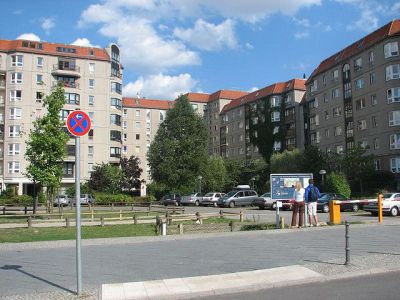 A complex of reinforced concrete cells formerly located beneath the garden of the New Reich Chancellery in Berlin, the Führerbunker (literally meaning "shelter/bunker [for the] leader/Führer), became the center of the Nazi regime until the last week of World War II in Europe. Having taken up residence in the shelter on 16 January 1945, Hitler celebrated his 56th birthday on April 20 and married Eva Braun 9 there days later, before they both committed suicide on April 30: he with a revolver, she by poison. Their bodies were allegedly taken to the Chancellery courtyard and doused with 200 liters of petrol; Hitler's followers gave the Nazi salute as the corpses burned to ashes. With the Soviets raising the red ﬂag on the Reichstag's rooftop, almost all the rest of the 800 or so bunker occupants decided to try and break out through railway tunnels towards northern Berlin; about 100 made it – the rest were either killed or captured.

After the war, both the old and new Chancellery buildings were leveled by the Soviets. Despite some attempts at demolition, the underground complex remained largely undisturbed until 1988–89, when excavated sections of the complex were uncovered (and mostly destroyed) by work crews during the area's reconstruction as a residential neighborhood. The site of the Führerbunker remained unmarked until 2006 when a small plaque was installed with detailed information, including a schematic diagram. The bunker's emergency exit point (which had been in the Chancellery gardens) was occupied by a car park.
Image by Will Palmer on Flickr under Creative Commons License.