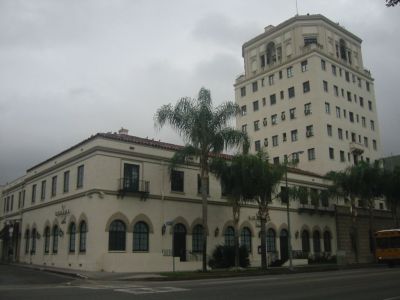 The Hollywood Athletic Club is a nightclub on Sunset Boulevard and it has a fascinating history and a long connection with some of the world’s greatest stars.

The building was designed and constructed by the Meyer and Holler architectural company in 1924. It was commissioned by Charlie Chaplin, Cecil B. de Mille, Lou Chaney and Rudolph Valentino as a gentleman’s sport’s club.

It was a favourite health spa for Johnny Weissmuller, who used its swimming pool to train between Tarzan films. It was also frequented by Douglas Fairbanks, Walt Disney and Errol Flynn, among others. Although it was a “gentleman’s” club, some pretty rowdy parties took place here too and it opened its doors at those times to women: Mary Pickford and Mae West were frequent visitors.

In the years after the building’s closure as a sports club, it became part of the University of Judaism and little by little it fell into disrepair when the university moved into a new building. It was bought in 1978 by Gary Berwin, who carefully restored it to its original beauty.

He also bought a Spanish-style house and bungalows on an adjoining lot and rented them out to stars and companies, such as Island Records. The new Club became famous for its parties where Steven Spielberg, George Lucas, Paul Newman and Michael J. Fox were regular guests.

In 1984, Gary Berwin wanted to expand his holdings and put the club onto the market. Joe Jackson (Michael Jackson’s father) put in an offer to buy a part of the complex, but negotiations fell through and Berwin found another buyer. For a brief period during the nineteen nineties it was once again a nightclub, but closed when the lease ran out.

Since 2006, the club has been revamped and now Peter Famulari’s Boulevard3 Nightclub stands on the site. Another part of the building is used as a film set.
Image by Gary Minnaert (Minnaert)) on Wikimedia under Creative Commons License.