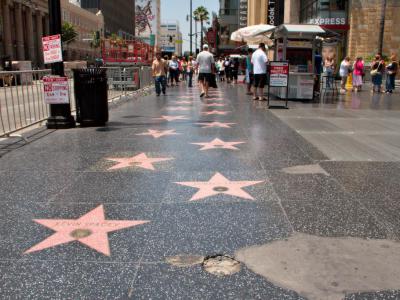 The Hollywood Walk of Fame is spread out over 15 blocks on Hollywood Boulevard and three blocks on Vine Street. It is the most visited area of Los Angeles with over 10 million visitors every year.

The idea first started in 1952, but the final design wasn’t agreed on until 1956. There are over 2500 stars to be seen and about 20 are added every year. The five-point stars are cast in pink terrazzo and edged in brass. This is then embedded in a dark grey terrazzo block and set into the pavement. A great deal of ceremony is attached to this and the honored person is invited to the ceremony and presented with a small replica to take home.

On the upper part of the star is the person’s name written in brass; on the lower part is a symbol depicting one of the five categories the person falls into: a classic film camera represents films; a television receiver represents television programs including everything, from soap operas to documentary films; the radio microphone is, of course, for radio broadcasts; the comedy/tragedy masks represent the theater and live performances; and the phonograph record is for the music world.

These permanent monuments are administrated by the Chamber of Commerce who decides which actor, director, producer, theater company, musician and even fictional character should receive this honor. One has two choices when visiting the Walk of Fame: either just wander along, looking at all the stars, or buy a guide to tell you where your favorite stars are located.

Tip:
To enjoy it and to avoid the crazy crowd, go early between 10am-3pm.
If you want to take a snap with any of the people dressing as a character, then be ready to pay cash for it.
Image by Christian Haugen on Flickr under Creative Commons License.