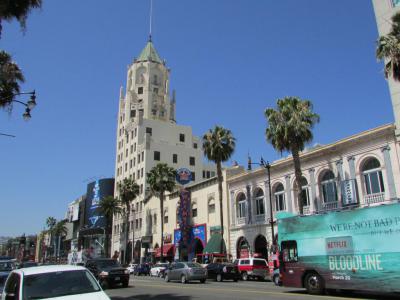 Situated on the famous Hollywood Walk of Fame, Hollywood Wax Museum is one of the most popular Los Angeles attractions. A brainchild of entrepreneur Spoony Singh, this well-known museum opened on February 25, 1965. It is argued to be the only museum in the U.S. to be entirely dedicated to celebrities, much as to be the longest-running wax museum in the country.

The museum features replicas of movie stars, such as Angelina Jolie, Johny Depp, Kirsten Dunst, as well as television and other legendary personalities, such as Elvis Presley and many others, whose stars are found on Hollywood Boulevard. Wax figures and sets featuring replicas of celebrities continue to change regularly. There is also a Chamber of Horrors, featuring classic and current movie monsters.

Operation Hours:
Monday-Thursday, Sunday: 9:00 am – 12:00 am; Friday, Saturday: 9:00 am – 1:00 am.
Image by Glen Bowman on Flickr under Creative Commons License.
Sight description based on wikipedia