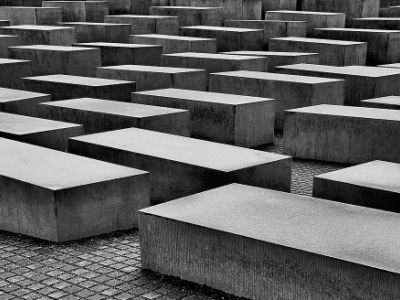 The Memorial to the Murdered Jews of Europe, also known as the Holocaust Memorial, commemorating the Jews and other victims of the Holocaust, was opened to the public on May 12, 2005. It was designed by architect Peter Eisenman and consists of 2,711 concrete slabs (stelae), one for each page of the Talmud arranged in a grid pattern that resembles a graveyard that you can walk through in any direction. Due to the undulations of the site, at times you can see over the blocks and at times you can't, and it is unclear whether the differing heights of the stones are important or just accidental.

The stelae are designed to produce an uneasy, confusing atmosphere, and the whole complex aims to represent a supposedly ordered system that has lost touch with human reason. It is quite simple and convincing, much as it is impressive and, as you wander the paths between the blocks, the power of the memorial hits you. An attached underground "Place of Information" holds the names of all known Jewish Holocaust victims, obtained from the Israeli museum Yad Vashem.

The memorial leaves you thinking of those who died and stirs the emotions. A place for thought and contemplation, but also to remind of the tremendous suffering, the lives lost, and the families destroyed by hatred and power. It does a perfect job reinforcing why those atrocities should never be allowed to happen again. This is NOT a photo opportunity but an urge to never forget. Definitely worth seeing. Impressive yet so sad.

Tip:
Designed for everyone to interpret the work of art for themselves. Visit with an open mind, with respect for all those that have gone, and make of it what you will.
After walking outside around the monuments, make your way downstairs to the free exhibit (€3 for an audio guide). It takes about 45 minutes to walk through, starting with the history of the Holocaust, then displaying some snippets of letters and journal entries by those taken to concentration camps.

Opening Hours:
Tue-Sun: 10am-8pm
Image by perceptions (on & off) on Flickr under Creative Commons License.