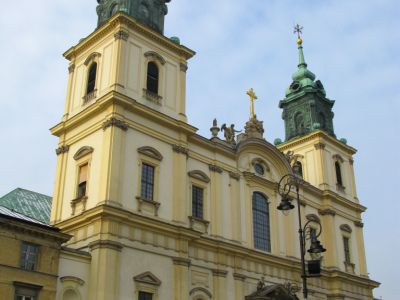 Poland can definitely be called the land of churches. There are numerous exquisite churches in this country and many of them can be found in its capital Warsaw. You cannot leave Warsaw without paying a visit to the final resting place of Chopin, the Holy Cross Church. The urn in which his heart was sealed is placed behind a tablet. The tablet was carved by Leonardo Marconi. It was in 1882 that it was added to the Holy Cross Church.

Apart from Chopin’s remains, the church is also noted for its astonishing Baroque design. The origins of this church can be traced back to the fifteenth century. Back then, there was only a small wooden structure which was destroyed during the 1650 Swedish Deluge.

The destroyed church was reconstructed in 1682. Prince Jakub, the son of King Jan III Sobieski laid the cornerstone for this structure that was designed by Jakub Bellotti, the noted architect of those times. Completed in the year 1696, the structure has since undergone numerous alterations and additions.

Sixteenth century saw two Baroque crowns added on by Jozef Fontana to the square-cut twin towers. Elaborate decorative touches were given to it later during the façade refurbishment by the architect’s son Jakub.

The unique and magnificent Holy Cross Church in Warsaw has been a witness of numerous calamities and glories here. This church is definitely a feast for the eyes, heart and soul.
Image by Mathiasrex Maciej Szczepańczyk on Wikimedia under Creative Commons License.
Sight description based on wikipedia

It's hard to imagine, except what we know from history, that on these beautiful Warsaw streets, thousands of Jews were herded and forced into cattle cars, on their way to concentration camps in the 1940s. Here, in the location of one of Europe's biggest concentration camps, about 400,000 innocent Jews suffered and died. Take the following tour to visit some of the places relevant to...  view more