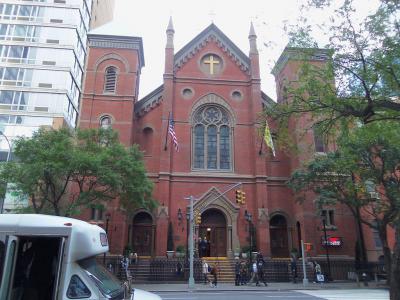 Located on 42nd Street just opposite the Port Authority Terminal, the Holy Cross Church is the first structure you'd notice getting off the bus at the Port Authority. Housed in the Italianate Gothic style edifice with a red brick facade and two towers, designed by Henry Engelbert, this Roman Catholic Church offers a bit of “calmness in the storm of the Big City”.

The interior shows a combination of Georgian, Classical, Romanesque and Byzantine styles – wooden benches, stained glass windows on the lower and upper levels. The altar area is a one-half oval shape and there are statues along the walls, with only fans to try to keep the congregation cool during hot summer days. The nine stained glass windows were imported from Munich, and Louis Comfort Tiffany designed the mosaics below the Dome. Mass is celebrated with choral music and congregational hymns sung in both English and Spanish.

The church is also called “Father Duffy’s church” after its most popular pastor, Reverend Francis P. Duffy, who was decorated for serving as chaplain of the 69th New York regiment that fought in World War I. Holy Cross Church operates a food pantry serving the poor and needy, and also offers a religious program, called LAMP, to provide counseling for parishioners and visitors. The church works in consonance with the local authorities to fight crime and drug trafficking in the neighborhood.
Image by Farragutful on Wikimedia under Creative Commons License.