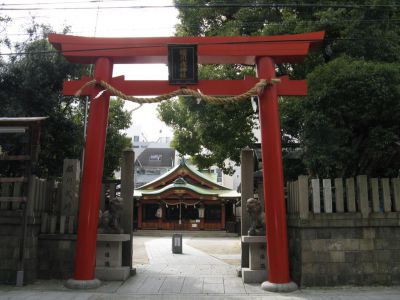 The Horikawa Ebisu Shrine is believed to have been founded in the 6th century. Tomi-no-Muraji Yoshio is said to have picked a ball after a divine revelation in a reedy marsh in Naniwa, the old name for Osaka. He enshrined it in Tomishima, Namba as an important holy spirit. The shrine was moved to its present location in the 1300s. It was completely destroyed by the bombardment of World War II. The present structure is the result of a reconstruction in 1963.

The Horikawa Ebisu Shrine hosts an important three day festival called the Toka Ebisu annually between January 9th and 11th. It is dedicated to Ebisu, the deity of commerce and worshippers come to pray for prosperity in the coming year. They buy Kicho-zasa which is a bamboo branch with models of a sea bream called Tai, a Japanese gold coin called Koban and a rice bag made of straw called the Kome-Dawara, the symbols of a flourishing business. A popular shrine within the complex is the Enoki Shrine popularly called the Danjiri Inari. It is believed that people hear lively Danjiri Music when their prayers at the shrine are about to be answered.
Image Courtesy of Wikimedia and KENPEI.