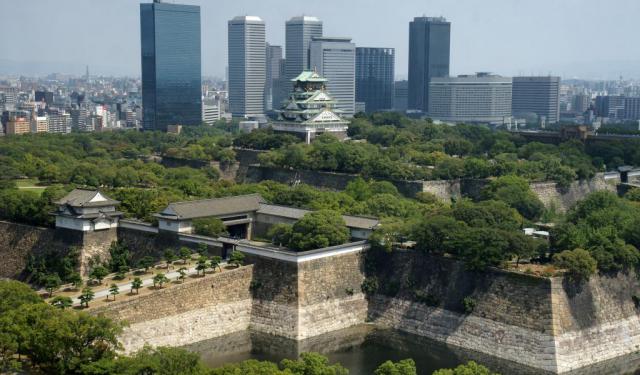 Apart from being an urban public venue, the area is also a historical site, dating back more than half a millennium. Back in 1496, during the Sengoku period, a militant temple of the leagues opposing samurai rule in Japan was built on the site. In 1583, Toyotomi Hideyoshi, a Japanese samurai, regarded as the second "Great Unifier" of Japan, destroyed the fortress and built Osaka Castle in its place.

From 1870 to 1945, most of the area was used as an army arsenal. In 1931, however, a small public park was opened nearby. But it wasn't until after World War II, when the arsenal was destroyed, that the park finally got enough space to expand.

As for the Osaka Castle, or “Osaka-jo” as they call it in Japanese, this five-story structure is certainly one of the most famous and visually spectacular landmarks in Japan. It also played a key role in the country's unification during the 16th century. The castle grounds cover some 15 acres of land and contain 13 structures denoted as “important cultural assets” by the Japanese government.

Chief among them, situated between the outer and inner moat, is Hokoku, a Shinto shrine built in honor of Toyotomi Hideyoshi, in 1879, by the Emperor's order. Another notable sight – one of the two places to cross the inner moat – is Gokuraku-bashi (Paradise Bridge). Just across the street from the Castle is The Osaka Museum of History; opened in 2003, this museum recounts 1,400 years of the city's history in a variety of media.

If you're keen to discover more about Osaka Castle and its past, catch a breathtaking view of the surrounding areas from its top floor, and, perhaps, explore one of the city's most popular hanami spots during the cherry and plum blossom season (in early April), take this self-guided walking tour and enjoy yourself.
Image Courtesy of Wikimedia and 663highland.
How it works: Download the app "GPSmyCity: Walks in 1K+ Cities" from iTunes App Store or Google Play to your mobile phone or tablet. The app turns your mobile device into a personal tour guide and its built-in GPS navigation functions guide you from one tour stop to next. The app works offline, so no data plan is needed when traveling abroad.

Osaka Castle Park is an urban park created in 1931. It is the second-largest park in Osaka. Along with recreational facilities, the park includes Osaka Castle and all of its historic buildings.

The public park and historical site lie south of the Kyu-Yodo River. The park offers a baseball field, a football field, an open-air music theatre, an open-air concert hall, and the Osaka Castle Keep Tower.

Osaka Castle Park has numerous historical monuments. There is a monument showing the spot where samurai Toyotomi Hideyori and his mother committed seppuku. There are three shrines on the site. The park has a martial arts training center, and it is home to the Osaka International Peace Center.

Popular activities in the park take place throughout the year. Tourists go to the park to watch buskers perform during warm weather. Spring is a popular time to view cherry and plum blossoms. Summer brings musical and theatrical performances to the park. Any time of the year, visitors can take in the views from the Osaka Castle Keep Tower.

Gokuraku-bashi, also known as Paradise Bridge, provides an entrance to Osaka Castle. Paradise Bridge crosses the northeast moat and provides a spectacular view of the castle jutting through the tops of the trees.

Paradise Bridge was first built in 1626 when Osaka Castle was restored. The bridge, originally made of wood, was necessary because of the deep moats and tall fortification walls, added by the Tokugawa Shogunate, the military government of Japan during the Edo period from 1603 to 1868.

The first bridge burned along with the castle in 1868. It took nearly 100 years for a new bridge to take its place. In 1965, when Osaka Castle was declared a Special Historic Site, Gokuraku-bashi was added.

Coming from the north, visitors will walk through Osaka Castle Park from Paradise Bridge to reach the castle itself. A blend of old and new architecture can be seen from the bridge as the north view shows the skyscrapers of Osaka, while the southern view captures Osaka Castle in all of its glory.
Image Courtesy of Wikimedia and Soramimi.
3

The Osaka Castle is one of the most famous landmarks in Japan. The castle functions as a museum and a popular tourist attraction.

Construction of the original castle began in 1583. It was modeled after the headquarters of feudal lord Oda Nobunaga, Azuchi Castle. Built by samurai Toyotomi Hideyoshi, the castle was designed to have a five-story tower with three additional underground stories. It was completed in 1597.

After his death, the castle passed to Hideyoshi's son, Toyotomi Hideyori. He ruled over the castle until it fell to the Tokugawa clan in 1620. The original building burned to the ground, and Hideyori committed seppuku, a form of ritual suicide.

Reconstruction of the castle included the main tower with five external and eight internal stories. The walls, built in 1620, are still standing, but the remainder of the castle burned when lightning struck the gunpowder warehouse. What remained fell into disrepair and was neglected through the early 19th century.

The castle was fully repaired in 1843 but only lasted 25 years, until it burned again. The Meiji government turned the remainder of the building into an army arsenal where guns and ammunition were manufactured.

Osaka Castle was one of the world's largest military armories during World War II when American bombs destroyed 90 percent of the military equipment.

The castle was restored between 1995 and 1997. It was rebuilt to resemble the original castle from the exterior as much as possible. It is surrounded by inner and outer moats with four water-filled sections that represent the cardinal directions.

The castle grounds contain 13 structures that are culturally significant to Japan. Among these are, the Ote-mon Gate, the Rokuban-yagura Turret, the Kinmeisui Well, Kinzo Storehouse, and the Enshogura Gunpowder Magazine.
Image Courtesy of Flickr and Chris Gladis.
4

The Hokoku Shrine is located in the Osaka Castle Park to the south of the Castle Keep or Hommaru. Three members of the Toyotomi family are enshrined here and worshipped as the Deities of success and good luck.

After the defeat of the Tokugawa Shogunate, the Meiji Emperor commissioned the erection of two shrines in honor of Toyotomi Hideyoshi who was responsible for the unification of Japan. The main Hokoku Shrine was built in Kyoto and a branch was constructed in Nakanoshima Azayamazaki-no-Hana in Osaka. It was moved to its present location in 1961 and the Osaka central Public Hall was built on its former site.

The Hokoku Shrine is dedicated to Hideyoshi, Hideyori and Hidenga Toyotomi. A large statue of Hideyoshi is located here. The garden laid in 1972 has an ocean theme because locals believe that the reason for the prosperity of Osaka was seafaring and maritime trade. It has the shape of a horse that was the emblem of Hideyoshi with large stones to represent an Ishiyama or Stone Mountain. Worshippers come here to obtain an amulet called Sennari-hyotan which is said to give them success and luck because the enshrined deity Hideyoshi, who started off as a low ranking soldier, later became one of Japan’s most successful leaders.
Image Courtesy of Wikimedia and KENPEI.
5

The Osaka Museum of History is dedicated to 1,400 years of the history of the city. It offers a multidimensional view of the past to visitors using reconstructions, scale models, videos and photographs.

The Osaka Museum was opened for public viewing in the year 2003 and is located across the street from Osaka Castle. The museum is housed in a modern building with a unique glass facade that offers spectacular views of Osaka Castle and Osaka Castle Park. It occupies the site of the Naniwa Palace, the royal residence built by Emperor Kotoku in 645 when Osaka was the capital of Japan. Displays of different eras in the history of the city are arranged from the 10th floor downwards.

Notable exhibits at the museum are the archaeological remains of the Naniwa palace on the ground floor, a reconstructed 5th century warehouse on the grounds of the museum, a reconstruction of the historical Dotombori street in Osaka, shopping streets in the city before World War II and a special section dedicated to Kabuki. The lower floors contain a restaurant, souvenir and other shops and a large lobby. The descriptions are in Japanese and visitors can rent an audio guide to explain the exhibits in English.