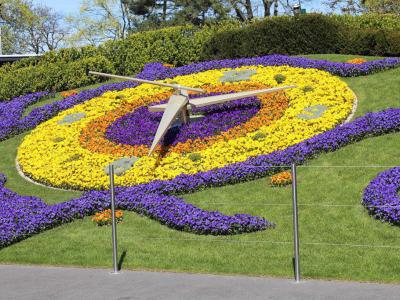 As the mother of high-end watches, Geneva has long been recognised worldwide for its watchmaking tradition. In tribute to this tradition and in dedication to nature, the Flower Clock was installed on the western side of English Garden in Geneva in 1955.

Measuring 5 meters (16 ft) in diameter, with the second hand being 2.5 metres (8.2 ft) long, it took some 6,500 flowering plants and shrubs to create the clock face. Geneva's Flower Clock remained the world's largest outdoor clock made of flowers until 2005, when it lost premiership to a 15-metre (49-ft) counterpart in Tehran, Iran.

Being in service for over half a century, the acclaimed Swiss clock has never stopped nor been out of order. What's also interesting is that it always looks different, being made of various flowers which bloom at different times during the year. The plants are changed according to season thus bringing in a new set of colors each time, making the Flower Clock truly unique. The entire mosaic is produced and maintained in a natural way without use of chemicals.
Image by Chabe01 on Wikimedia under Creative Commons License.
Sight description based on wikipedia