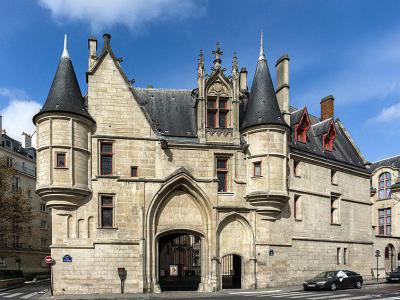 Built between 1474 and 1519 as a home for the bishop Tristan de Salazar, Hotel de Sens is one of the three original medieval residences left in Paris. The building's mixed architectural design reveals transitions that had taken place between the Medieval and Renaissance epochs. The architecture of Hôtel de Sens shows elements of a fortification structure. There are turrets (armored towers) for observing the surrounding area, a square tower served as a dungeon, as well as an arched entryway with built-in slopping passages from where boiling hot oil could be poured upon would-be attackers.

On a different note, in 1605, Queen Margot, ex-wife of King Henri IV of Navarre, settled in the hotel. Eccentric by nature and with a taste for lavish lifestyle, Queen Margot reportedly indulged herself with numerous love affairs here and is said to have gathered her lovers' hair to make wigs that she later sported.

Sold off in 1797, the structure was badly mutilated during the 19th century and subdivided for a multitude of uses. After the French Revolution (which left it with a cannonball still lodged in the wall), it was occupied by art students and, at some point, was turned into a jam factory. After decades of public pressure, it was finally saved by the city government, which undertook an ambitious restoration program between 1933-61.

The building as we see it today is largely a reconstitution of the original, based on drawings dating back to the 17th century. The main staircase tower, however, is original, as is the wonderfully picturesque entrance front. Despite its somewhat fanciful restoration, the Hotel de Sens is nonetheless an evocative remnant of medieval Paris – currently, home of the Bibliothèque Forney devoted to decorative and fine arts, as well as industrial techniques.

On your tour of Paris, make sure to stop by and admire this medieval residence's elegant formal gardens and dramatic design. Sit down on one of the garden benches and relax, detached from the nearby hectic city. It's a lovely place to take a little picnic lunch before continuing your Marais exploring.