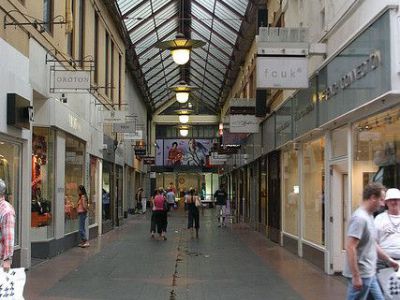 You might see the Howey Place arcade referred to as Cole's Place in some older guides. It starts on Little Collins Street and is a narrow and short laneway between Swanston and Elizabeth Streets. From the back, it connects to the Capitol Arcade on Swanston Street.

Edward William Cole created the arcade in 1896 when he covered this little street with a glass canopy to attract tenants. Some of the original shops included Cole's bookstore, a print shop, and a toy store.

Henry Howey, for whom the street is currently named, bought this parcel of land in 1837 for a whopping 128 Pounds Sterling. The Howey House, a 1930s art deco building, sat here but was demolished in the 1980s to build the Sportsgirl Centre.
Image by Scootie on Flickr under Creative Commons License.