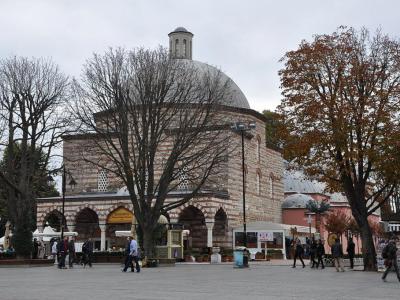 The Ayasofya Hurrem Sultan Hamam, aka Haseki Hamam, is a bath complex in Istanbul designed and built at the request of Hurrem Sultan (Roxelana), the wife of Sultan Suleiman the Magnificent, in 1556-1557 AD. It stands on the site of the ancient public baths of Zeuxippus (100-200 AD) between the Blue Mosque and the Hagia Sophia, which is also particularly significant as the site where the Temple of Zeus once stood.

Built in the classical Ottoman style, at the total length of 75 meters, it has facilities for both men and women, and was actively in use until 1910, when it was closed and, for some time afterwards, used as a storehouse. After restoration works in the 1950s, the property was converted into a carpet shop.

In 2011, after a 13 million dollar investment and three years of meticulous restoration work, the facility reopened as a hamam once again. From the outside it may look nothing special, but as soon as you step in, you will be in awe. Today, this is one of the most luxurious traditional Turkish hamams, offering 5-star packages with 5-star services that will leave you completely blissed out. The hamam also has an on-site open-air cafe and restaurant. With the motto, "Some rituals never die," the Hurrem Sultan Hamam’s luxuries will leave you feeling like Hurrem Sultan herself. Open daily: 07:00-23:59.
Image by Robert Cutts on Wikimedia under Creative Commons License.