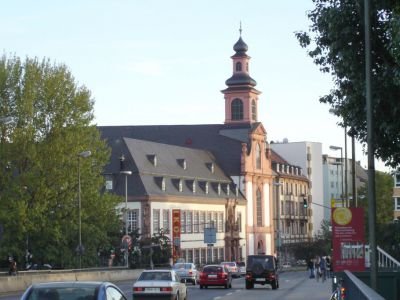 The Icon Museum, located in an old refectory of the Teutonic Knights who fought the Crusades, is a small but significant repository with one of the largest collections of icons in the world.

The Icon museum lies at the eastern end of the Museum Embankment in Frankfurt. The old refectory was redesigned by Cologne based architect Oswald Mathias Ungers with modern and clearly contoured rooms to display the magnificence of these religious wooden paintings. The permanent exhibits were a gift from a physician from Konigstein, Dr. Jorgen Schmidt-Voigt consisting of 800 valuable icons. The museum has expanded its collection and now has over 1000 exhibits. Another permanent donation of post Byzantine icons came from the State Museum of Prussian Cultural Heritage, Berlin.

The collection has icons from all parts of the world where the Eastern Orthodox Christian faith flourishes. There are icons from Russia, Egypt, Syria and Ethiopia. Most of them are from the 15th to the 20th century. A treasured exhibit is a 12th century Egyptian Coptic paper icon. Besides icons the museum has other objects like crucifixes, religious robes and liturgical items. Works by famous icon artists like Emmanuel Tzanes, Michail Milutin and Yussuf Al Mussawir form part of the collection.

The Icon Museum is open from Tuesdays to Sundays and guided tours are provided for the convenience of visitors.