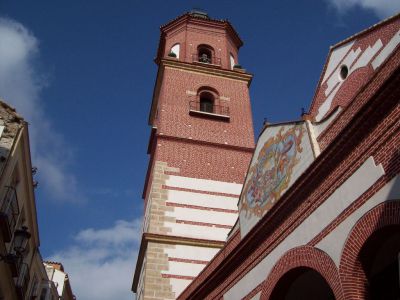 One of the four churches built by the Spanish Catholic Monarchs after the defeat of the Moors in 1487, Iglesia de los Mártires is dedicated to two martyred saints, Ciriaco and Paula who were canonized in an early Christian era. The saints, together with Our Lady of Victory are the patron saints of the city of Málaga.

Work on the church began in 1491. Don Diego de Deza increased the pace of building the structure in 1505. The architectural style was Gothic-Mujedar with pointed arches. There are three naves topped with a majestic cupola on top of the main chapel. It underwent extensive renovation in the 18th century and was rededicated in 1777. The church was damaged several times after 1777 and the present structure is a result of repairs and renovations in 1945. The brick church has many styles and the predominant design is Rococo. The tower still retains its Mujedar Moorish design. The church has 11 chapels decorated marble and stone sculpture. In 1545, Diego de Portilla installed a baptismal font. Many of the chapels have gilded altars.

This church of the Martyrs stands on a square called Martyr’s Plaza. A simple church service to honor the martyred saints takes place on 18th June every year.

Why You Should Visit:
While the outside is not too impressive, the inside is nicely decorated.
The walls and ceiling are white so the artwork shows off quite nicely.

Tip:
Check out the side chapels – in particular, the one containing a life-size naturalistic sculptural depiction of the Last Supper.
Image by Miwipedia on Wikimedia under Creative Commons License.