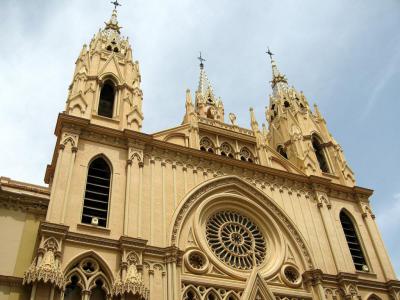 Among the diverse Neo-Gothic churches built in Málaga at the turn of the 20th century, this is the only one located in the Old Town that belongs to the Jesuit Order. Commissioned by the Jesuits, the architect Fernando Guerrero Strachan designed it in January 1907, using the cathedral of Toledo as a model to integrate Islamic elements, as well as the cathedral in Burgos and the monastery of las Huelgas.

The produced result is the basilica, divided into three naves, covered with a ribbed vault. The transept, with an octagonal plan and a star-shaped vault, stands out. The choir is set at the foot of the central nave, which is higher and wider than the side aisles. Another prominent feature is the Gothic-style stained glass windows, produced by Apolo Párkinson Molinari.

Why You Should Visit:
Amid the myriad of impressive churches found in (or around) the historic center of Málaga, this one may appear somewhat tucked away and overshadowed by the Málaga Cathedral, but is still worth checking out, if only for the cleaned stonework – rather pretty, especially when floodlit at night.

Opening hours:
Monday-Saturday, 9am-1pm and 6-8:15pm. Saturday, 9am to 1pm. Sundays, from 10am to 2pm.
Image by Olaf Tausch on Wikimedia under Creative Commons License.