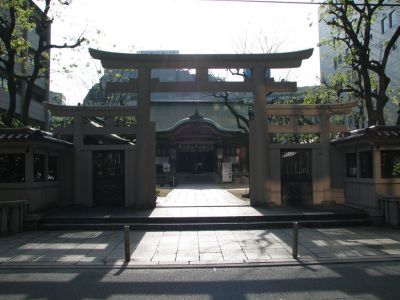 The Ikasuri Shrine is one of the most important Shinto shrines in Osaka. It is popularly known as Zama san and five important deities are enshrined here.

The Ikasuri shrine is said to have been founded by the Empress Jingu who enshrined Ikasuri-no-kami here. The shrine was at the time located on the banks of the Yodo River. Some historians believe that it was first dedicated to the guardian deity of Settsu Nishinari-gun, the ancient name of Osaka. Toyotomi Hideyoshi is said to have relocated the shrine to its present site when he planned to build the Osaka Castle.

Today, the Ikasuri shrine is dedicated to five important Shinto deities or Kamis, Ikui, Sakui, Tsunagai, Hahiki and Hasuha. Worshippers come here to pray for the protection of their homes, safety during travel and safety on arrival. Over 200 hydrangea plants grow within the shrine and a hydrangea festival is hosted every June. The Toki shrine within the complex is unique and is made entirely of ceramics. While in other Japanese shrines, the lanterns are made of stone this shrine has ceramic lanterns. The Toki festival is held at the shrine on July 23rd annually. The Ikasuri Shrine today is surrounded by shops selling second hand goods and wholesale ceramics.
Image by nnh on Wikimedia under Creative Commons License.