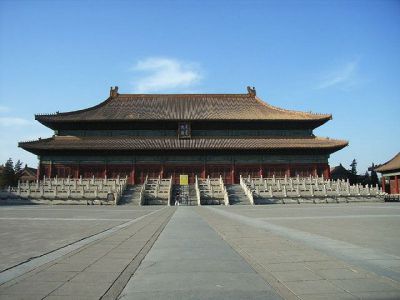 Located to the east of Tiananmen Square, the Imperial Ancestral Temple is also known as the Working People’s Cultural Palace. It was here that the Ming and Qing dynasties offered sacrifices to Earth and Heaven. This temple was built in 1420 during the Ming dynasty ruler Yongle’s reign.

Covering an area of 197,000 square meters, this temple has three red walls surrounding it. As you enter through the Halberd Gate, you will be struck by the solemn and imposing central structures. The roofs of the three halls in this structure are covered with yellow glazed tiles.

The Sacrificial Hall is where grand sacrificial ceremonies used to be held. The sumeru, three-tiered base of this hall is made of white marble. The hall’s interior looks grand with sixty-eight columns made of exquisite and expensive nanmu golden silkwood. The ceiling dazzles with its gilded colored paintings and is complemented by the golden brick paved floor.

On each side of the hall, you will find long, spacious corridors leading to a compound at the southern end. Here you can see exquisite stone bridges over the Golden River. Visit this temple that takes you right back to those ancient times.

Why You Should Visit:
Lots of history, way cheaper than the Forbidden City – like a smaller version that's quieter and also easier on the legs, but with similar architecture and still significant.

Tip:
A great place to get uncrowded photos, to walk around with only a handful of others and to enjoy a pleasant park, right in the heart of Beijing.