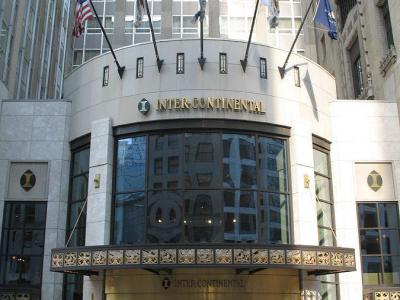 Built in 1929, at the peak of Chicago’s skyscraper glory, this hotel combines a mix of Egyptian, Greek, Art Deco, Gothic, and medieval architectural styles for an impressive tower with various carved sections topped with a golden cupola. Originally home to the Medinah Athletic Club, the 42-story hotel included a boxing arena, an archery range, and an Olympic-size swimming pool, which is still intact.

If you're in the area, stop by the concierge desk to pick up an iPod featuring an audio tour of the original Athletic Club public spaces. The tour takes less than 30 minutes and directs you to some interesting interior rooms, at one flamboyant and elegant. Did you know that the center light fixture in the Grand Ballroom is a 12,000-pound Baccarat crystal chandelier, the largest in North America? There is also a more masculine "smoking lounge" with heavy timbering, lavish stained glass, and a hand-painted ceiling depicting the stories of King Arthur and Parsifal.

There is a lot more to see here – last but not least the elevated full-size indoor pool which holds 120,000 gallons of water and was named after Johnny Weissmuller, the famous Olympic athlete and actor who trained in it. Its blue Spanish majolica tiles and terra-cotta fountain of Neptune remain unchanged and will make a trip here even more worthwhile. There's also a Starbucks and Michael Jordan's Steakhouse at the ground level, plus Garrett’s Popcorn as well as the NBC studios just around the corner.
Image by TonyTheTiger on Wikimedia under Creative Commons License.