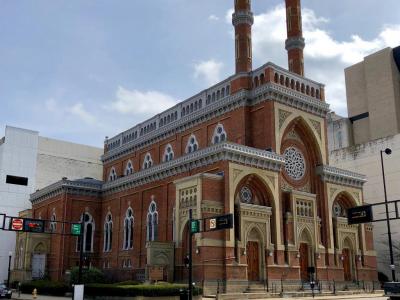 The Isaac M. Wise Temple (formerly the Plum Street Temple) is the historic synagogue erected for Rabbi Isaac Mayer Wise. Rabbi Wise was the founder of American Reform Judaism. The temple is located at 720 Plum Street and was built by members of the Lodge Street Synagogue. The temple was dedicated on Friday, August 24, 1866 and is among the oldest synagogue buildings still standing in the United States. This building was designed by James Keys Wilson and blends the Neo-Byzantine and Moorish Revival styles of architecture. The temple has a tripartite facade, rose window and a basilica style arch, similar to a Gothic Cathedral, yet Islamic influences are visible in its minarets and other architectural details.

This sight is featured in a self-guided walking tour of Cincinnati, Ohio within the mobile app "GPSmyCity: Walks in 1K+ Cities" which can be downloaded from iTunes App Store or Google Play. Please download the app to your mobile phone or tablet for travel directions for visiting this sight. The app turns your mobile device to a personal tour guide and it works offline, so no data plan is needed when traveling abroad.