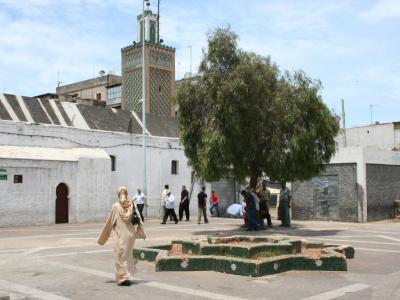 In the center of the old city of Casablanca there is a mosque that once went by the name "Fig Tree Mosque." It was a very small mosque. It was built in 1899 by Mohammed Senhadji of Sousa. In time the fig tree and the mosque grew. The growing congregation needed more room. The name of the Mosque changed to Jamaa as-Chleuh.

The Jamaa as-Chleuh mosque can be found on the Rue des Chleuh, literally in the "heart" of the old city of Casablanca. It is near Bab Marrakech, an arched sandstone gateway that withstood the earthquake of 1775. The Chleuh mosque has its own particular beauty. It is a true Friday mosque.
Image Courtesy of Flickr and Ninara.