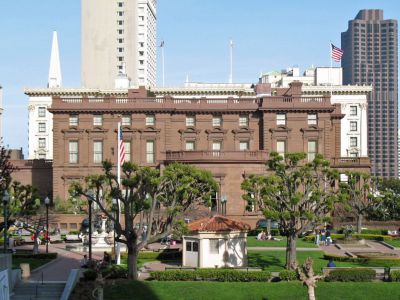 Born in New York, Flood came to California around the time gold was discovered in San Francisco. He started off a saloon, then a stock broking firm which went on to become the richest firm in America in less than 20 years of its inception. The firm then started a mining operations in Comstock Lode, the biggest silver mine in the world. The firm also set up the Bank of Nevada.

Flood then built this 42 room mansion in 1885, a couple of years before his death. The brownstone used in the construction was shipped around Cape Horn. The location of the mansion is the Nob Hill, which was the most opulent area at that time. However, the fire gutted this structure in 1906 although the building survived the earthquake. The Pacific-Union Club soon took over this building in 1907 and maintained the structure, whist using it as the headquarters for their operations. The structure has been unaltered ever since and was declared as a National Historic Landmark in 1966.
Image by Sanfranman59 on Wikimedia under Creative Commons License.
Sight description based on wikipedia