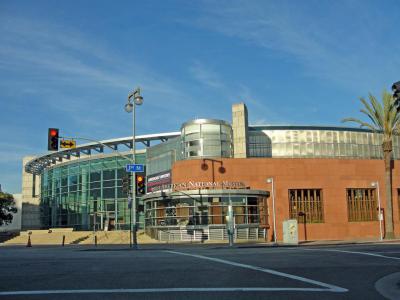 The Japanese American National Museum (全米日系人博物館, Zenbei Nikkeijin Hakubutsukan) is dedicated to preserving the history and culture of Japanese Americans. Founded in 1992, it is located in the Little Tokyo area near downtown. The museum is an affiliate within the Smithsonian Affiliations program.

The museum covers more than 130 years of Japanese-American history, dating to the first Issei generation of immigrants. Its moving image archive contains over 100,000 feet (30,000 m) of 16 mm and 8 mm home movies made by and about Japanese Americans from the 1920s to the 1950s. It also contains artifacts, textiles, art, photographs, and oral histories of Japanese Americans. The Japanese American National Museum of Los Angeles and the Academy Film Archive collaborate to care for and provide access to home movies that document the Japanese-American experience. Established in 1992, the JANM Collection at the Academy Film Archive currently contains over 250 home movies and continues to grow.
Image Courtesy of Wikimedia and Justefrain.
Sight description based on Wikipedia.