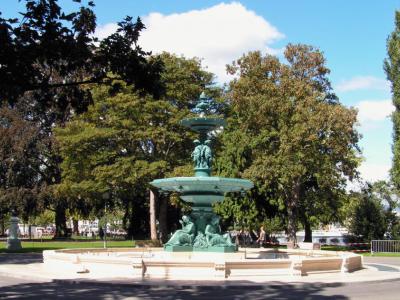 Spread over 25,430 square meters of land, the English Garden is a spacious urban park, one of the greenest in Geneva. Originally built in 1855, it was modeled on traditional English landscape design. In 1863, the park had its form drastically changed to a trapezoid following the construction of the nearby Mont Blanc bridge.

Whilst an attraction in its own right, the English Garden is also home to several notable landmarks, such as the National Monument, the world-famous Flower Clock, the bronze Four Seasons Fountain, several pavilions and a coffee house.

The latter, called "The Gossips", is a great place to relax in the middle of the Garden and, as its name suggests, exchange some gossips. Another local attraction is the Geneve Boat. This boat was made famous when, on September 10th 1898, the Austrian Empress Sissi, after being stabbed in the heart by an Italian anarchist, ran to catch him and collapsed on the deck only to die an hour later. The boat is now a welfare association, offering counselling and free meals to the people in need; tourists are also welcome to hop on for a lunch or dinner.

From mid-July to mid-August, the English Garden serves as one of the hosts of the annual summer Geneva Festival.

The Garden is also home to several hundred-year-old trees, like a ginkgo planted in 1863 and a purple beech planted in 1895 for the National Exhibition. A giant cedar, a majestic sequoia, a large-flowered magnolia, horse chestnut trees, a tulip tree and other species complete the enchantment of the site. The entire green space of the park is managed ecologically, without any chemicals.
Image by Romano1246 on Wikimedia under Creative Commons License.
Sight description based on wikipedia