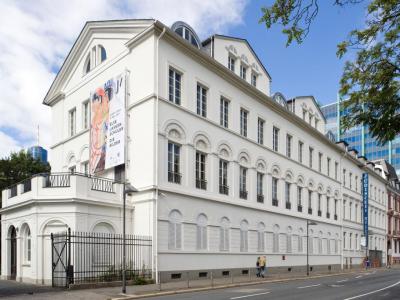 At the end of the 1970s, head of the municipal cultural department initiated the project for a museum bank. A Jewish museum in the Rothschild Palais and an adjoining building on Untermainkai were approved by the city council in 1980. In the following years, a commission of historians had developed a concept for the museum that was to present the history of Frankfurt's Jews from the 12th century to 1945. Donations made it possible to create the basis for an own collection. The opening of the first Jewish Museum in the Federal Republic of Germany took place on the 50th anniversary of the November pogrom, on November 9, 1988, and was presided by Helmut Kohl.
Image Courtesy of Wikimedia and Mylius.
Sight description based on Wikipedia.