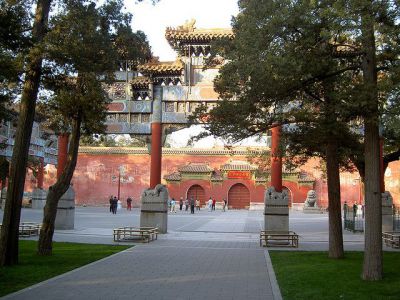 Jingshan Park is a popular tourist attraction in Beijing. This park is situated at the city’s center on Jingshan Hill and is spread over an area of 230,000 square meters. The royal, spectacular garden features a unique and stunning landscape and is located right opposite Forbidden City’s north gate. You can enjoy an amazing view of the Forbidden City from the peak of Jingshan Park.

Jingshan Hill was laid out in a proper manner during the Ming Dynasty rule though it had been serving as the imperial garden during the Yuan, Ming and Qing dynasties between 1271 and 1911.

Jingshan Park was first opened to the public in 1928 and was completely rebuilt with paved paths. Today this park attracts millions of tourists from around the world. The first thing you will see the moment you enter the park’s front gate is the Qiwang Pavilion. Green cypresses embrace this charming pavilion where the memorial tablet of Confucius was worshipped by the emperors. This two-storied, majestic and dignified pavilion features a golden-glazed roof and white marble balustrades.

There are five summits in Jingshan Hill and on each summit, you can find a pavilion. There was a copper Buddha statue on each pavilion representing the five tastes namely bitter, salty, sweet, sour, and pungent. During the 1900 war, all statues were destroyed.

Wanchun Pavilion is the most popular among the five located in the middle of the five summits. This is Beijing’s highest point from where you can enjoy a spectacular view of the city. As you stand on the pavilion, to your north you can see the dignified Bell and Drum Towers, the magnificent and resplendent Forbidden City to the South and the White Dagoba Temple and Beihai Park to the West.

Why You Should Visit:
A really nice upkept garden park, featuring nice outdoor covered areas and old trees. The calm and serenity here is refreshing and the view from the top of the hill is amazing.

Tip:
You can enter via 3 gates: East, West, and South (all have ticket booths), the latter being accessed directly opposite the exit to the Forbidden City’s North gate exit. The city views, as you ascend, get better and better.