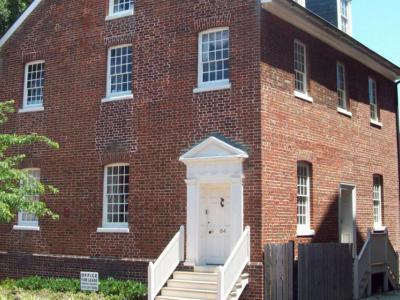 John Callahan House, known previously as Pinkney-Callahan House, is yet another historic edifice in Annapolis. This house is a significant example of Colonial craftsmanship and design, and ranks among the major architectural monuments of the city.

This brick home was built around 1785-90, designed by John Callahan, a prominent and wealthy Annapolitan, who served as the Register of the Western Shore Land Office between 1778 and 1803. The house features an unusual gable-end principal facade and a largely intact Georgian/Federal interior finishes. It once served as St. John's College Infirmary.

The property has been moved twice in efforts to prevent its demolition. In 1900-01, it was relocated to St. John’s Street, and then to its present site on Conduit Street in 1972. John Callahan House is a contributing property in the Colonial Annapolis Historic District. It was first listed on the National Register of Historic Places on November 12, 1971, and then again, after its relocation, in 1973.
Image by Pubdog on Wikimedia under Creative Commons License.
Sight description based on wikipedia