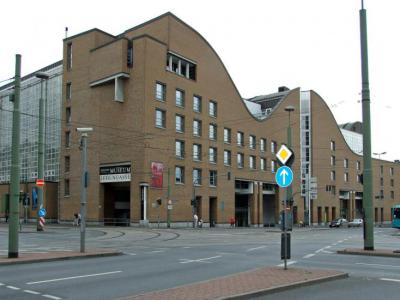 The Judengasse Museum is a branch of the Jewish Museum in Frankfurt, and it was opened in 1992. The museum presents the history and culture of Frankfurt's Jews, from the Middle Ages to the emancipation, manifested in the foundations of five houses on Judengasse.

Frankfurter Judengasse was the first Jewish ghetto in Europe. It was built in 1460 by the old Hohenstaufen city wall; two years later, the Jewish residents of Frankfurt, who had previously lived in the immediate vicinity of the cathedral, were forced to resettle. The Judengasse developed over the centuries into a cultural center that was widely known for its scholarship, being visited by students from far and wide.

The ghetto was demolished in the 1870s, but the neighboring old Jewish cemetery was retained, even though no more funerals had been carried out there already. Immediately next to the cemetery, at the southern end of the former Judengasse, the Börneplatz synagogue was built in 1881/82. The latter was destroyed during the November pogrom of 1938. In 1942, the Nazi administration ordered to demolish the old Jewish cemetery, which was not fully implemented.

In 1987, during the construction of an administration building on Börneplatz, foundations of 19 houses on Judengasse were discovered – the largest archaeological find to date of a Jewish settlement from the early modern period in Europe. The discovery sparked a nationwide public debate on how to deal with this evidence of a suppressed Jewish history. While the city of Frankfurt endeavored to only document the remains and remove them to clear space for the new building, numerous protests were voiced against the removal as a "history disposal". At the end of the so-called Börneplatz conflict, which once again highlighted the strained German-Jewish relationship, a compromise was finally reached: five of the found house foundations were removed and rebuilt in the basement of the administration building at the original location.

In March 2016, the house was reopened with a newly designed exhibition.
Image Courtesy of Wikimedia and dontworry.
Sight description based on Wikipedia.