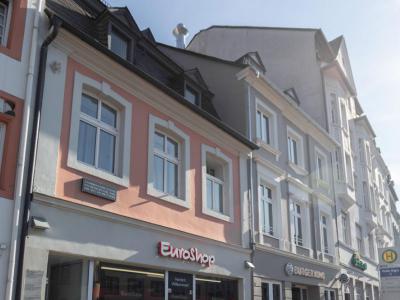 The home of the Marx family on Simeon Street 1070 was the center of Karl Marx 's life in Trier during his youth. Today a plaque commemorates the famous resident.

Karl Marx was born at what is now Brückenstraße 10, where his parents lived in rented accommodation. Known as the Karl Marx House, this birthplace now houses a permanent exhibition on the life and aftermath of Karl Marx.

On October 1, 1819, Heinrich Marx, Karl Marx's father, bought the small house in Simeon Street not far from the Black Gate for the price of 18,987 francs in installments and the family moved there from the Brückengasse.

The Karl Marx Childhood Home is located at the beginning of the city's promenade, which leads directly to the main market. In this house Sophia, Karl, Hermann, Henriette, Louise, Emilie and Caroline were baptized on August 26, 1824. His brother Eduard Marx died here on December 14, 1837. Karl Marx lived in this house until he graduated from high school in autumn 1835.

The Simeon Street has remained unchanged to this day, so the young Karl Marx walked along the same shopping street daily on his way to school.

Even in later years, the path of life often led the Karl Marx back to his childhood home. In 1841 and 1842, the house once again became the center of Marx's life. After successfully completing his doctorate in philosophy, he traveled from Berlin back to Trier in 1841. He lived in his parents' house for several months, visited his fiancé Jenny von Westphalen every day and pursued further studies here.
Image Courtesy of Wikimedia and Lucyinthesky80.
Sight description based on Wikipedia.