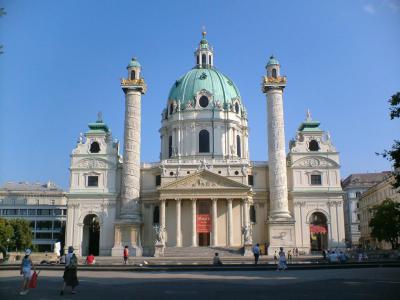 Vienna's Karlskirche (St. Charles' Church) is located in the eponymous Karlsplatz (St. Charles' Square), about 200 meters away from Ringstrasse, and is one of the finest examples of Baroque religious architecture in the city. Among its prominent features are the impressive oval high ceiling dome topping the structure, the elongated form of the building, and the exterior columns modeled on the famous analogues in Rome dedicated to the Emperor Trajan. The Viennese columns celebrate the life of St Charles Borromeo (to whom the church is dedicated) and the vast power of the Hapsburgs, symbolizing the Pillars of Hercules. Another interesting feature are the two spheres with metallic reflective sides allowing viewers to observe more details of the interior.

In recent times, the location has become a very popular tourist attraction, in large part due to its peculiar style, starkly contrasting that of other buildings nearby. St. Charles' is run by a local Catholic order and remains a parish church. It is also seat of the Catholic student ministry of the Vienna University of Technology and thus, apart from being an architectural marvel, is a functional institution.

Erected to celebrate the emergence from black plague that struck Vienna hard in the early 18th century, the Karlskirche is virtually a monument to St Charles Borromeo who was renowned for ministering to the needs of plague victims. History tells that Emperor Charles VI made a vow to God that he would build a church and name it after St. Charles Borromeo, if God relieved the city of the disease. God did, and so did the Emperor.

On May 28, 1878 Strauss married his second wife, a young singer named Angelika Dittrich, at St. Charles' Church. Unfortunately, Dittrich was not a supporter of his music and their marriage ended in divorce in 1882.

Tip:
You have to pay to get in (students get a discount), but it's well worth it for the lovely interior.
There is a lift inside that can take you close to the murals on the dome ceiling. From up there, you can also enjoy a spectacular view of the city from the dome window.
Image Courtesy of Wikimedia and Theitalianpen.