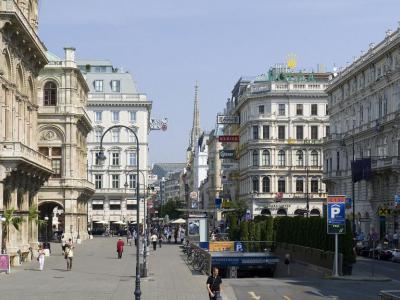 Kärntner Straße (Carinthian Street) is Vienna's main shopping thoroughfare, in place since the Roman era. Originally known as Strata Carinthianorum – the first record of it dates back to 1257 – this street used to link the downtown area to the city wall. Only a handful of historic buildings from that period still remain, having survived WWII.

Today Kärntner Straße extends from Stephansplatz to Karlsplatz, and is chockablock with old-time houses, traditional shops and stylish flagship stores of popular and luxury international retail brands, some of which are hidden in the side streets. En route, the street abounds in historical gems, such as the Winter Palace of Prince Eugene and Neuermarkt. The Maltese Church seemed like an anachronism in the face of modern retail shops surrounding it and, of course, at the end of Kärntner, the majestic Wiener Staatsoper (Vienna State Opera House). In 1974, the street was made fully pedestrian, much to the delight of local residents and tourists, who flock here regularly to shop, stroll, and generally enjoy themselves.

Why You Should Visit:
Great for shopping, people-watching, and admiring Vienna's baroque architecture.

Tip:
Can get pretty crowded, especially during peak tourist season.
Image Courtesy of Wikimedia and Gugerell.
Sight description based on Wikipedia.