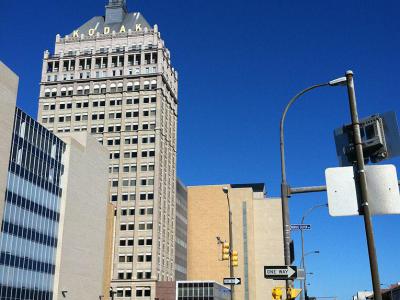 Kodak Office Tower is the seat of one of the most successful American brands, Kodak, the leader in the film and camera industry; it was established in 1892 by an amateur photographer, George Eastman, and became the city's main industrial employer. The tower itself was built in 1914 and is a sixteen-storey building, with three additional floors, roof and cupola having been added in 1930; it has interesting architectural elements and big historic value.
Image by Larry on Wikimedia under Creative Commons License.

Want to visit this sight? Check out these Self-Guided Walking Tours in Rochester. Alternatively, you can download the mobile app "GPSmyCity: Walks in 1K+ Cities" from iTunes App Store or Google Play. The app turns your mobile device to a personal tour guide and it works offline, so no data plan is needed when traveling abroad.