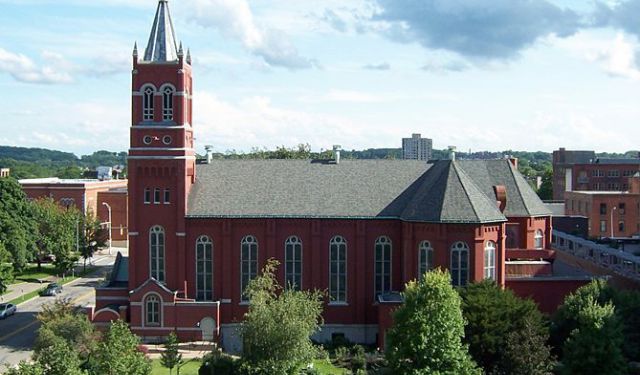 Downtown United Presbyterian Church – a historic brick complex designed in 1860 as an Early Romanesque Revival–style edifice; has been listed on the National Register of Historic Places since 1992.

St Mary's Church, dedicated in 1858, is the place where celebrated actress and ballerina Giuseppina Morlacchi and cowboy scout and actor Texas Jack Omohundro got married on August 31st 1873. Complete with its brick rectory (built in 1905), the building was added to the National Register of Historic Places in March 1992.

First Universalist Church – a Romanesque Revival-style building described by notes at The Library of Congress as "Unified in concept, harmonious in proportions and color, the major portion of the structure remains essentially unaltered." Added to the National Register of Historic Places in May 1971.

Christ Church – a large Gothic Revival-style building made of "rock-faced red Albion sandstone" – was listed on the National Register of Historic Places in 2008.

Our Lady of Victory Roman Catholic Church – a historic French Romanesque Revival-style brick cruciform-plan church built in 1868; was listed on the National Register of Historic Places in 1992.

To learn the stories behind and to explore architectural marvels of these and other religious venues of Rochester in more detail, take this self-guided walking tour.
How it works: Download the app "GPSmyCity: Walks in 1K+ Cities" from iTunes App Store or Google Play to your mobile phone or tablet. The app turns your mobile device into a personal tour guide and its built-in GPS navigation functions guide you from one tour stop to next. The app works offline, so no data plan is needed when traveling abroad.

The Downtown United Presbyterian Church was established in 1974, as a result of the collision of three historic religious sites - First, Brick and Central Presbyterian Churches. The present building, which houses the church, was built in 1860 and restored in 1904, featuring classic Romanesque style. Thus the church has deep roots in the community's spiritual life, gathering a lot of people together and serving the religious interests of the three congregations.
Image by Thomas Belknap on Flickr under Creative Commons License.
2

St. Luke and St. Simon Cyrene Episcopal Church, also known as Two Saints, was formed as a result of the union of two congregations in 1988. But the former church, the oldest one in the city, was built on this site in 1824. It is an original example of 19th-century Gothic Revival style. This multi-ethnic and progressive parish church provides spiritual growth through education and religious services, hosting many important ceremonies for believers who come and hear the word of God.
Image by Matthew D. Wilson (LtPowers) on Wikimedia under Creative Commons License.
3

St. Mary's Roman Catholic Church and Rectory are located in downtown Rochester. It was created in 1834 as Rochester's second Roman Catholic parish, after St. Patrick's Parish. The cornerstone of the church was blessed 18 September 1853 by Bishop of Buffalo John Timon. The building was dedicated, with Timon presiding, on 24 October 1858. The architect of the church is unknown, but design influences of Richard Upjohn and other church architects are apparent.

A brick rectory was built in 1905, replacing an earlier rectory. A spire and bell tower, designed by Richard B. Arnold were added in 1939-1940. The north tower may have been intended to have a spire originally, but financial difficulties may have precluded adding it earlier.

The church and rectory were added to the National Register of Historic Places on 12 March 1992.

Image by Matthew D. Wilson on Wikimedia under Creative Commons License.
Sight description based on wikipedia
4

The roots of First Universalist Church were established in 1819. The church's building, which was built in 1907, is included in the National Register of Historic Places, highlighting the beauty and history of its Romanesque architecture, which was inspired by the nearly 1500 year-old Hagia Sophia Mosque in Istanbul. First Universalist's community provides important programs for children, youth and adults, having as its purpose to enrich and deepen the spiritual attitude of people.
Image by Matthew D. Wilson (LtPowers) on Wikimedia under Creative Commons License.
5

Christ Church is mentioned in the National Register of Historic Places, thanks to its impressive building of Gothic Revival architectural style, built in 1894. The church's liturgy is accompanied by musical compositions interpreted by the choir. It also houses the internationally renowned Craighead-Saunders organ, especially built for the church. The spacious building hosts important ceremonies and services, which are of interest to a lot of people.
Image by Mark A. Lackey on Flickr under Creative Commons License.
6

Our Lady of Victory Roman Catholic Church was established in 1848 and since 1992 it is part of the National Register of Historic Places. It is also known as Our Lady of Victory/St. Joseph Roman Catholic Church, because of the unification with St. Joseph, a parish that was destroyed by fire. The church was built in 1868 and featured Early Romanesque Revival with some elements of Barrocco. The architect was Andrew Ackson Warner. The church's community is a welcoming and caring one, with more than 700 members, who achieve their peace and happiness through worship and sharing.
Image by Jfaust42 on Wikimedia under Creative Commons License.