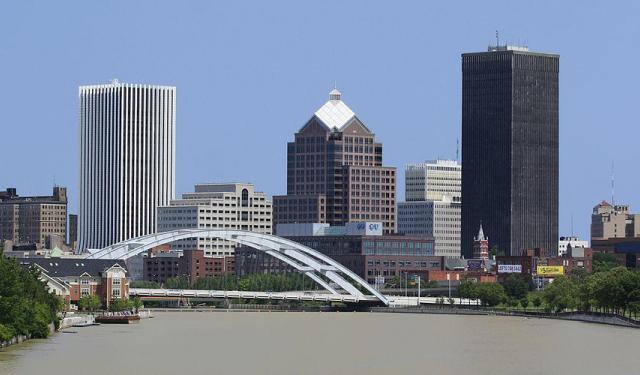 The Eerie Canal construction in the 1820s helped the city grow into an urban center that would set the stage for its place as a milling and manufacturing center. In addition to wheat processing, commercial nurseries became popular in this city. Bausch & Lomb and Eastman Kodak had their start in this city in the late 19th century.

During the 20th century, manufacturing in the city waned. However, the food, technology, and imaging industries retain a significant presence in this city.

The inexpensive hydrolic power provided by the the Genessee River made Rochester one of the early industrial centers in the U.S. A visit to High Falls and the nearby Triphammer Forge Site is a great way to appreciate city's industrial heritage.

Rochester is host to several outstanding museums, including the Eastman Museum, focusing on photography, the Strong National Museum of Play with its emphasis on games and toys, and The Rochester Memorial Art Gallery, host to art in many popular mediums.

Take a self-guided walking tour to learn about the many exciting sights standing proudly in Rochester.
Image Courtesy of Wikimedia and Evilarry.
How it works: Download the app "GPSmyCity: Walks in 1K+ Cities" from iTunes App Store or Google Play to your mobile phone or tablet. The app turns your mobile device into a personal tour guide and its built-in GPS navigation functions guide you from one tour stop to next. The app works offline, so no data plan is needed when traveling abroad.

High Falls in Rochester, NY, is on the Genessee River. During the U.S. Industrial Revolution in 19th century, the falls served as a power source for local industry, and the site has been a point of interest from the city's earliest days. Today, the falls help produce hydroelectric power for people living in and around the Rochester area.

Visitors who want to have the best view of the falls will be able to do so from the Pont De Rennes Bridge. This pedestrian bridge has an excellent vantage point from near the falls' base. The river's west bank has a viewing terrace that provides views of several landmarks, such as the wheel pit from the city's first sawmill.

The falls are one of the city's top places for photo opportunities. There is even a railroad bridge above the falls that is a famous landmark for train enthusiasts. No matter what your interests are in addition to the falls themselves, you'll appreciate the time spent at this location.

Image Courtesy of Wikimedia and Evilarry.
2

The Pont de Rennes Pedestrian Bridge is one of Rochester's most famous landmarks. This 1891 bridge, initially designed for car traffic, has been a pedestrian bridge since 1982. The street where this bridge was located was Platt Street, and the current name comes from Rennes, Rochester's sister city in France.

This bridge spans 858 feet and is part of the Genesee Riverway Trail. Visitors who want a perfect view of the High Falls have an excellent chance of getting the view that they seek from this bridge. Limestone, sandstone, and shale rock formations are readily visible near the foot of this bridge.

If you want to take some pictures of the falls or the river, this bridge is an ideal vantage point. You may even have the chance to see wildlife or birds passing through. If you are in this area after dark, you will have a treat waiting in the form of a light show.

As an archaeological site, Triphammer Forge provides an exciting glimpse into the city's industrial past. These ruins have been stabilized, allowing visitors to walk by without disturbing any of the artifacts present. The massive water wheel has been reconstructed, demonstrating the importance that this area once held in the manufacturing industry in New York.
Image Courtesy of Flickr and berriehol.
4

Rochester City Hall is a historic government building in Rochester in Monroe County, New York. Also known as the Federal Building and Old Post Office, the building was originally built for use by the federal government. It is a four-story, Richardsonian Romanesque style structure with an inner court and tower.

It was built between 1885 and 1889 of heavy brown sandstone with a metal skeleton. It was expanded in 1893 and in 1907. The building was designed in part by architect Harvey Ellis under the Office of the Supervising Architect Mifflin E. Bell. The building has served as the City Hall since the 1970s.

It was listed on the National Register of Historic Places in 1972.
Image Courtesy of Wikimedia and DanielPenfield.
Sight description based on Wikipedia.
5

The Blue Cross Arena is Rochester's indoor arena that seats over 11,000 for multiple types of events. This building dates back to 1955 and saw a renovation in the 1990s. Teams that play here regularly are the National Lacross League's Rochester Nighthawks and the American Hockey League's Rochester Americans.

In addition to sporting events, the arena is a popular destination for concerts and other live events, such as professional wrestling. Visitors are often impressed with the size of the portable stage, which rivals the stage's size at Radio City Music Hall in New York City. The inside of this arena is worth a look, even if nothing is going on at the time.

There is an Adpro Team Store in the lobby, selling merchandise perfect for Rochester Americans fans. Some of the merchandise includes jerseys and T-shirts in adult and youth sizes. This store is open during the early afternoon hours and home games.
Image Courtesy of Wikimedia and Matthew D. Wilson (LtPowers).
6

The Strong National Museum of Play is one of Rochester's best attractions for people of all ages, particularly kids. Some of the permanent collections include dolls, toys, and games. There are also collections dedicated to video and other electronic games, ranging from the earliest vintage games to the latest video games commonly in use today.

Favorite children's characters with exhibits include the Berenstein Bears and Sesame Street. The museum boasts aquariums with colorful fish species, as well as a butterfly garden. A carousel and train also provide an extra bit of fun, with the carousel having been restored to its original vintage beauty.

This museum is host to the National Toy Hall of Fame, highlighting such classics as Barbie, Candy Land, Lincoln Logs, and View-Master. The World Video Game Hall of Fame is also here, highlighting video gaming's evolution over the years. Some of the inducted games include Bejeweled, Centipede, The Legend of Zelda, Pac-Man, The Oregon Trail, and Tetris.

The Little Theatre in Rochester opened in 1929 in an Art Deco style building. Expansion during the 1980s led to the former three-screen theater boasting five screens. There is also a cafe seating 70 guests that hosts jazz performances.

The films at this theater include independent and documentary films. In addition to these feature-length films, you can also watch award-winning short movies that might be hard to catch elsewhere. This theater has also been host to film festivals, including The Polish Film Festival, which has attracted a reasonably large following since its inception.

There is also an art collection that you will not want to miss at the theater. These exhibits change monthly, so there is always something new to see. Many of the artists represented are local artists who are already somewhat popular, and others are more unknown artists looking to grow a popular following locally.
Image Courtesy of Wikimedia and DanielPenfield.
8

The George Eastman House Museum is the world's oldest museum dedicated to photography and holds one of the world's oldest film archives. World-renowned for its photograph and motion picture archives, the museum is also a leader in film preservation and photograph conservation, educating archivists and conservators from around the world. Home to the Dryden Theatre, the museum is located in and around the house built by George Eastman, the founder of Eastman Kodak Company. The house was designated a National Historic Landmark in 1966.

The George Eastman House Museum of Photography was chartered in 1947. From the outset, the museum's mission has been to collect, preserve, and present the history of photography and film. The museum opened its doors on November 9, 1949, displaying its core collections in the former public rooms of Eastman's house.

With an increasing number of materials to store and display, a new facility opened to the public in January 1989. In 1996 the museum opened the Louis B. Mayer Conservation Center, one of only four film conservation centers in the United States. The facility houses the museum's rare 35 mm prints made on cellulose nitrate. The museum's permanent collection comprises more than 400,000 photographs and negatives dating from the invention of photography to the present day.