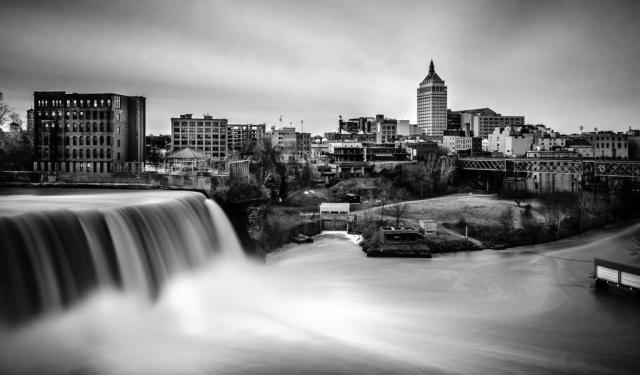 Once a major manufacturing center, Rochester, NY went down in history as one of the United States' first boom-towns. Back in between 1860 and 1900 the city's population grew threefold on the back of the inflow of numerous immigrants – Italians, Germans, Irish and others – that saw Rochester expand dramatically on both sides of the Genesee River. During that period the city rose to prominence as the birthplace and home of some of America's most iconic companies, such as Eastman Kodak, Xerox, Western Union and more.

Owning to its rich industrial heritage, Rochester abounds in historical industrial buildings. Foremost among them is, undoubtedly, the Kodak Tower, formerly the headquarters of Eastman Kodak, recognized as an icon in the world of film photography (dubbed the "nerve center of photography"). Following its completion in 1914, it was the city's tallest building for over half a century until the Xerox Square Tower surpassed it in the late 1960s.

In 1967-69 Xerox Corporation built in Rochester a 30-story office building – Xerox Tower. The edifice is still the city's tallest, as well as the third tallest structure in New York State outside of New York City.

Another prominent landmark in the Rochester Skyline, boasting a triple mansard roof and observation tower, is the Powers Building. Listed on the National Register of Historic Places since 1904, it was once also the tallest building in Rochester, between 1873 and 1888. Not least noteworthy in this respect is the Times Square Building, an Art Deco skyscraper of 14 floors.

To visit these and other historical places that had shaped the image of Rochester, NY as the center of American industry, take this self-guided walking tour.
Image Courtesy of Flickr and Sean X Liu.
How it works: Download the app "GPSmyCity: Walks in 1K+ Cities" from iTunes App Store or Google Play to your mobile phone or tablet. The app turns your mobile device into a personal tour guide and its built-in GPS navigation functions guide you from one tour stop to next. The app works offline, so no data plan is needed when traveling abroad.

Kodak Office Tower is the seat of one of the most successful American brands, Kodak, the leader in the film and camera industry; it was established in 1892 by an amateur photographer, George Eastman, and became the city's main industrial employer. The tower itself was built in 1914 and is a sixteen-storey building, with three additional floors, roof and cupola having been added in 1930; it has interesting architectural elements and big historic value.
Image Courtesy of Wikimedia and Larry.
2

Button Factory Building was established in 1904, housing the former Rochester Button Company, founded in 1887 by Moses B. Shantz. Producing buttons from vegetable ivory, plastic and milk curd, the company became one of the world's leading manufacturers and distributors of buttons, until 1990, when its activity came to end. Today this important historic building houses some commercial offices.

The building was listed on the National Register of Historic Places in 2013.

As an archaeological site, Triphammer Forge provides an exciting glimpse into the city's industrial past. These ruins have been stabilized, allowing visitors to walk by without disturbing any of the artifacts present. The massive water wheel has been reconstructed, demonstrating the importance that this area once held in the manufacturing industry in New York.

Parazin Building, erected in 1826, was the prime house of the Seyle Fire Engine Company, where the first fire engines were produced and provided to adjacent cities of the New York State. The building represents typical architecture of the district at early times; the first two floors are designed with coursed stone rubble and the two upper floors, with random ashlar stone.
Image Courtesy of Wikimedia and RocPX.
5

Powers Building is a historic office building located in Rochester. It was built in 1869 and is a nine-story, 165-by-171-foot (50 by 52 m) building, laid out around a large open stairwell in the center. It features a triple mansard roof and observation tower which were added after initial construction, between 1873 and 1888, by Daniel Powers to maintain its standing as the tallest building in Rochester. It was designed by noted Rochester architect Andrew Jackson Warner.

It was listed on the National Register of Historic Places in 1973. In 2019, the adjacent Powers Hotel was also added to the listing.
Image Courtesy of Wikimedia and Drpetit.
Sight description based on Wikipedia.
6

The Times Square Building is an Art Deco skyscraper designed by Ralph Thomas Walker of the firm Voorhees, Gmelin, and Walker located in Rochester. At 260 feet (79 m), it is the eighth-tallest building in Rochester, with 14 floors. The former Genesee Valley Trust Building is a streamlined twelve-story building supporting four aluminum wings 42 feet high, known as the "Wings of Progress", each weighing 12,000 pounds.

These structures are among the most distinctive features of the Rochester skyline. The trompe-l’oeil style is used for the decor throughout the building's interior and features various depictions of stylized wheat in reference to Rochester's presence as "the flour city".

An interesting historical note about this building is that the cornerstone of this building was laid on October 29, 1929, "Black Tuesday" of the 1929 stock market crash.
Image Courtesy of Flickr and Alan Kotok.
Sight description based on Wikipedia.
7

The "Digital X" Xerox logo at the top of the building was removed in 2005 with Xerox's new positioning away from "The Document Company" signature and the related logo in use since 1994.

On April 18, 2009, Xerox announced their wish to sell the tower and other buildings in Xerox Square, and lease back the office space. In August, 2013 the property was sold to Buckingham Properties for $40 million. Under the terms of the sale Xerox will continue to lease space in the building for eight years, with an option to renew. Between the Summer and Autumn of 2015, a multi-color light display was added to all four corners of the tower roof.

The complex formerly featured an outdoor skating rink and an English pub-style restaurant called The Shakespeare, both of which operated until the late 1970s or 1980s before being converted to a private outdoor lounge for Xerox employees.

On January 26, 2018, Xerox has announced that it would vacate the entire building to move all their local employees to Webster.
Image Courtesy of Wikimedia and DanielPenfield.
Sight description based on Wikipedia.