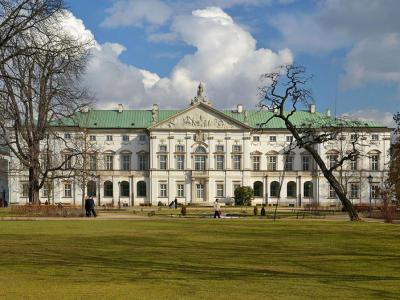 Sometimes called the Palace of the Commonwealth, Krasiński Palace was built between 1677 and 1683 and reconstructed after World War II. It was initially designed and built for the Voivode of Plock, Jan Dobrogost Krasiński.

Krasiński came from an old Mazovian noble family. He was heir to a large fortune, and he was interested in French culture and architecture. He hired French artists for the work on his home, in addition to Michelangelo Palloni, who did the frescoes.

The palace was purchased by the state in 1765 and turned into the Treasury Commission and later the Supreme Court of Poland's home. It was burned down and mostly demolished during the German occupation of Poland during World War II. The Germans deliberately destroyed most of the artwork housed in the palace during the Warsaw Uprising; today, the collection contains only about five percent of its former catalog.

Today Krasiński Palace is part of the Polish National Library's Special Collections Section. The garden is a beautiful place to take a walk, look for the Baroque gate from Bohaterów Getta Street. The gardens are made up of a public park with fountains, walking paths, and many monuments. If you're visiting Krasiński Palace, take a detour across the street to visit the Warsaw Uprising Fighters monument.
Image by Pudelek on Wikimedia under Creative Commons License.