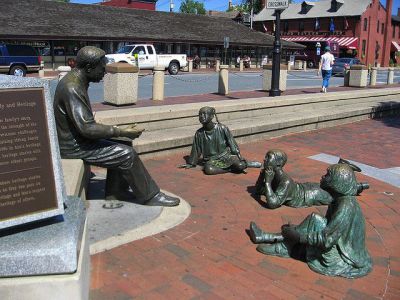 Located at the head of the Annapolis harbor, beside the City Dock, the Kunta Kinte-Alex Haley Memorial is the only memorial in the United States commemorating the actual name and place of landing of an enslaved African in the New World. The monument was inspired by Alex Haley’s 1976 Pulitzer Prize-winning novel, “Roots: The Saga of an American Family”, which tells the story of his ancestor, Kunta Kinte, an 18th-century African boy from the Gambian town of Jufferee, who was sold into slavery and transported in chains to the United States. The memorial marks the very spot where Kunta Kinte set foot on American soil, and is dedicated to all of African Americans' ancestors whose names are lost forever in the oceans of time.

The memorial comprises three distinct areas: the Alex Haley sculpture group, the Compass Rose, and the Story Wall. The former depicts Haley himself, reading from a book on his lap to three children of different races sitting in front of him. The nearby Compass Rose is made of granite and measures 14 feet in diameter; it includes a bronze inlaid compass and the world map oriented to true North, with Annapolis at its center. The third piece, lining the retaining sea wall on Compromise Street, is the Story Wall. It represents a series of ten markers topped with bronze plaques, each displaying a quote from Alex Haley’s book. Each quote is accompanied by text and unique graphics to explain its meaning.

The “A Luta Continua” (Portuguese: “the struggle continues”) slogan refers to the 23 years of challenges that took to erect this memorial, from 1979, when Alex Haley’s best selling story prompted discussions of its placing, to June 12, 2002, when the final phase of the Kunta Kinte-Alex Haley Memorial was dedicated. In 1981, the first commemorative plaque installed on the site was stolen within just 48 hours, allegedly by the Ku Klux Klan! The news of the theft made international headlines, but the plaque was never recovered. Two months later, citizens of Annapolis had raised funds and replaced it.

Today, the memorial is seen by almost 1,000,000 visitors a year. Sadly, Alex Haley himself did not live to see it completed.
Image Courtesy of Flickr and Mrs. Gemstone.