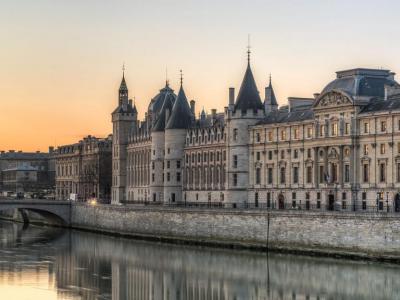 The City Island (Île de la Cité) in Paris, situated amid the river Seine, is a home to the 14th-century palace that went down in history as the seat of the French parliament prior to the French Revolution. It is also known as the home of France's first public clock, installed around 1370. Build on orders of King Philippe IV, the palace was recurrently added to and rebuilt up until the early 20th century, thus gradually becoming a fascinating conglomeration of buildings.

Nowadays, it is particularly famous for its Conciergerie section which owes its name to a “concierge”, the official nominated by king to maintain law and order in Paris. In 1391, the building was partially transformed into jail to hold both regular criminals and political prisoners. The treatment of inmates depended totally on their wealth, social status and personal connections. The most affluent were usually allowed separate cells with a bed, desk and reading/writing materials. Those less rich settled for more modest cells, called “pistols”, furnished with a rough bed and a table, whereas the poorest ones were kept in the dark, damp and vermin-infested cubicles, known as “oubliettes” (or “dungeons”). Most prisoners wouldn't stay there for long though, as the carts carrying the condemned to the nearby guillotine, in Place de la Concorde, kept running on a regular basis.

During the French Revolution, hundreds of people were killed. At some point, the Conciergerie became a VIP prison seeing among its inmates the likes of Queen Marie Antoinette and Napoleon III. Later, Marie Antoinette's cell was made into a chapel and is currently open for public viewing, featuring, among other relics, several of her portraits made during the final days before the execution.

Those eager to learn more about the French Revolution and the history of France in general are free to explore this fascinating Gothic site with its halls and dungeons. For more information and better understanding of what this place was like back in the day, consider spending a few euros on the little 'Histopad' gadget, combining both audio & visual function, offered on the site. It is quite handy!

Why You Should Visit:
An absolutely fascinating Gothic landmark where you can learn about the French Revolution and other historic moments.

Tip:
Visiting the Conciergerie is possible on a combined ticket granting access to the neighboring Holy Chapel as well.