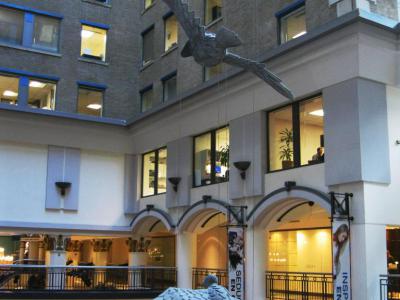 Linked to the city's huge net of underground malls, Les Cours Mont-Royal is a rather small – but elegant – upscale shopping center housed in a former hotel – once the largest in the British Empire, having featured 1,100 rooms! The architecture inside truly is gorgeous, with original ceiling mosaics and a dazzling giant chandelier adding elegance to the main hall.

While boutiques are for the most part classy and high-end (e.g. DKNY, Harry Rosen, or Ethan Allen), you can also find some unique places that sell reasonably priced items, so don't be discouraged or intimidated. Come here to find trendy shoes/kicks, a suit, a classy outfit, luxury street ware, coffee, healthy snacks or lunch, and more.

Albeit small, the food court is quite nice, and there's also a spa and a hair salon if you're in need of a beauty break.

Tip:
Stop by the Barbie Expo – a unique large display of over 1,000 dolls spanning different eras, wearing outfits from major designers including Dior and Givenchy.